From Single drop-down to Multiple check-boxes

TL;DR: Follow the incremental approach below. Divide the entire problem into small sub-problems and deploy them one by one:

In this article you will:

Picture a Rails application that’s deployed to production. And it serves requests from real users all around the clock. That is, a live Rails application performs 24/7 for now and forever. Maintenance downtime is not desired and must be avoided as much as possible. This is the most important requirement a good business asks about, isn’t it?

As time goes by, the business decides to make the following changes. There is a drop-down allows picking one choice on UI. But from now on it should have multiple choices. Speaking in ActiveRecord terms, there is a belongs to/has many association in the system that has to be changed to has and belongs to many.

A graphical explanation of the problem: 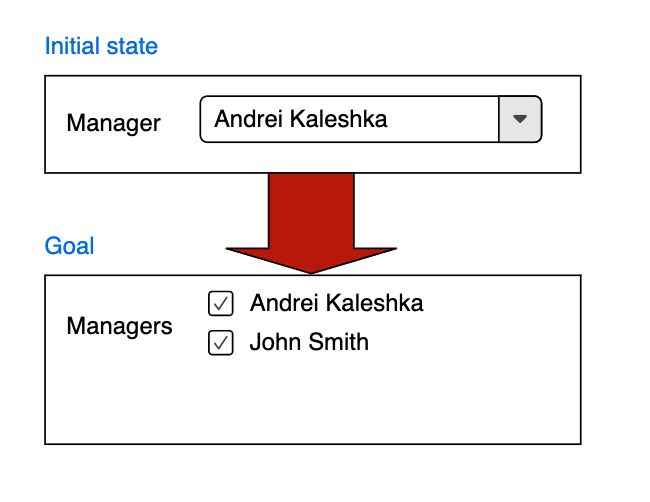 How to approach that? Well, someone might think it’s not a big deal for MVP, PoC, or a fresh startup without real users. And that’s true. In all these cases everything can be changed and re-deployed with the old data deleted at a time.

But for a mature live application with zero downtime requirements, where any data loss or bugs are not acceptable, this exercise might be a big challenge.

This post guides step by step making the transition above happen without any outages, breaks, data loss, or bugs. And it turns out the suggested idea follows Continuous Delivery approach So that it brings clarification on what that chicky term means.

The following example supposes to bring more clarity. It dives deep into the problem and allows to feel the describing solution. So that similar situations can benefit from the knowledge.

Consider a real estate system that has properties. And managers that are responsible for them, i.e. add properties into the system, keep them up to date, make them inactive/active/searchable/etc. From Rails perspective that means there are Property and Manager models. They relate to each other as Property belongs to Manager and Manager has many Property:

Nowadays, there are many technologies to implement UI. That’s why it’s barely possible to give a common recommendation on how to handle that part of the system. For simplicity, assume that UI is rendered by the traditional Rails approach on the server-side in “views”. The following assumptions and suggestions are based on this agreement.

From the code point of view it means that somewhere there are calls:

Note, the methods above can be called explicitly. It’s possible to find them by “grepping” the code easily. Or they can be called implicitly. For example, with the mass assignment of parameters to the models. But nevertheless, whenever the property-manager relation needs to be addressed, the methods above are eventually called. And that in turn means, they form an interface. An API if you will.

Our destination is the following code:

And its corresponding DB state:

For that reason, it’s better to deliver the changes gradually. That would allow shipping many small pieces to production continuously not blocking the whole development process or the entire business uses the software. That would provide immediate feedback on whether the deployed small piece works or not. A small not working piece can be fixed or rolled back much easier and faster than a huge bunch of changes. That reduces risks. It makes the delivery process comfortable and safe for both sides: working business and software development. It’s a guaranteed nerves-free process.

But first, these small self-sufficient pieces should be identified. That may seem hard and not obvious. In fact, this suspect is true. But once one feels how to do that on a particular example, like this one, similar cases should be easier to tackle.

On the very first step think about the initial and the final stages. What’s the difference between them? Which places should be changed to move from the starting point to the final one? The previous sections have already figured out that. These are places to change:

My suggestion is to start with the DB structure first if this step is present in the list of required changes. In our case, it’s there.

Its implementation is not hard: just make a usual Rails migration creates the new table. It can be shipped without nerves at all.

Pay attention, as all further steps this is an easy change can hardly break something on production servers.

The only caveat is not to forget necessary indexes, foreign keys, columns with correct types, and constraints. Otherwise, a new migration should be added and deployed again. That takes time. So it’s better to spend some time on analysis of the requirements. Try to anticipate possible usages of the new structures at this stage. The spent time defines a correct DB structure is a good investment as it will save time later.

Let’s observe the following migration should satisfy all the needs:

Pay attention to the table name. It should contain names of the two joined tables by the underscore, pluralized, in the lexical order. Refer to the original documentation, if there are questions.

To keep the data integrity:

A PostgreSQL select query uses a multicolumn index if any of the filtering fields are part of the index. In other words, the compound manager_id + property_id index will come into play for both ActiveRecord statements .where(manager_id: ...) and .where(property_id: ...). That’s why there are no separate indexes for property_id and manager_id. This not only reduces the DB structure complexity but also saves space on the data store.

Keep in mind, this trick with complex indexes may not work for some older PostgreSQL versions or other databases, such as MySQL. That’s why this question should be verified in each particular case.

The previous step migration can be deployed without any problems. But the created table is not useful while nothing writes into it. While empty, there is no point to read from it. Let’s start writing then!

There are at least two ways how to do that in a Rails application: use ActiveRecord callbacks or DB triggers. Which one to choose is up to the code authors. Both solutions have pros and cons. But play well if properly implemented.

Whatever way to choose, the following logic should be implemented:

If go with ActiveRecord callbacks, it may require many changes and much more effort to put. Callbacks are skipped in some cases. For example, #update_column, #update_columns, .update_all calls on ActiveRecord models don’t execute callbacks. Take into consideration that these methods can be called with meta-programming implicitly. And now the implementation doesn’t look easy at all. All the code should be read carefully. And all the places that call these and possibly other methods should take care of the simultaneous write. Additionally, if some new code is added afterward and misses that point there may be data inconsistency.

That’s why it’s better to use DB triggers. Once they are written they work as designed without any caveats. No need to read the whole codebase searching the methods above and changing those lines. No need to implement some tricky code, etc. Check out the implementation for PostgreSQL:

Just run this migration and from now on changes to the belongs to association will make appropriate changes in the many-to-many table automatically.

Thanks to Rails’ dependent: :nullify option above, whenever a manager gets removed it sets manager_id to null for all of the associated properties. That change to null executes the DB trigger. That in turn means, all the data integrity requirements above are satisfied.

Now it’s time to deploy this migration to production.

But that’s not all when it comes to data. There is still old data on the properties.manager_id without related managers_properties row. This can be fixed with so-called “data migration”. In short, it’s just a code snippet that makes the job done. There are many ways to implement it. All of them can be found in another article Change data in migrations like a boss.

Run the following SQL snippet against the production DB and that makes all that’s needed on this step:

The snippet is idempotent, so that it can be run many times without any harm to data. Also, it doesn’t conflict with any other process is writing data into managers_properties at the same time due to whatever reason.

To prove the data is consistent, it would be good to allow the system to work for a while with the deployed steps above. Say, for one week. After that run this script against production DB:

The first select statement checks whether all filled in property-manager relations have corresponding rows in managers_properties table. It should return no results. The second one checks if there are no “aliens” in the new table. The result should be empty as well. Both statements together guarantee that the old belongs to/has many DB data structure is in sync with the new one - has and belongs to many.

When the data integrity between the old and the new structures is proved, there is only one major step is left. This one relates to UI changes. It supposes to have fixes applied to the rest places of a Rails application: models, views, controllers. Probably, the easiest place will be model as it needs only the definition of the new relation:

On the view layer, the form updates managers for properties may look like this:

All of these changes may be deployed at once or incrementally. For example, the views that render read-only information of the association can be delivered first. After this, controllers and models can be prepared for the new associations along with params structure without dropping the old functionality yet. Next, the UI updates property managers can be changed.

On the final step, the outdated code should be just dropped. It may include the following changes:

And that’s all steps needed to make the transition requested by the real estate business happen.

We’ve seen how a DB change on a Rails application with production setup should be done. This is a multi-step and not fast process. It takes time to make the transition happen without bugs and downtimes. At first glance, the given task may seem too hard. But all the required steps are small and easy.

The described technique is a very powerful tool confirmed by experience on live applications. The post shows the concrete example of how to change a single select to multiple choices on UI. But the idea applies to any transition requires changes in DB on a Rails application that has production setup with zero downtime 24/7 requirements.

Unfortunately, it’s hard or even not possible to describe all the niceties of the whole process. There are still many aspects this article doesn’t show:

If you have any of those or other questions, don’t hesitate to ask me. Thanks for your attention and happy bugless coding in production!